Akagi is the 13 year old genius who is skilled at mahjong and psychological warfare. In the most recent and most famous arc, Akagi plays against his strongest opponent Washizu in a game where transparent mahjong tiles are used. Reading Akagi is like reading a riichi detective story, where we go through a lot of suspense to reach the answer to Akagi’s epic moves.

This tells the story of young Washizu, who became Akagi’s most powerful opponent in the main series. Washizu is known for his fearsome luck, but in this story, he demonstrates some intuition and strong planning skills which make his mahjong style even scarier

Hero is the sequel to both Akagi and Ten. The name of the series is a pun for the main character Hiroyuki, who is acknowledged as Akagi’s disciple. Hero is known as the ‘God’s eye’ for being extremely observant and noticing the slightest detail in mahjong. It is interesting to watch Hero as he unravels the tells of his opponents and surroundings.  As this series is ongoing, the number of available chapters is limited.

Focuses on girls taking part in riichi tournaments using superpowers. Despite some yuri content, the series is moe and entertaining. Watch out for epic comebacks with superpowers.

A side story of Saki to establish one of their competitors in the finals. The superpowers of these characters are toned down from the main series, and there is more plot development. The story is touching and well-written. 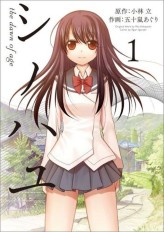 Shinohayu – The Dawn of Age

Origin stories of older characters in Saki, notably Hayari Mizuhara in Saki and Akado Harue in Achiga. The characters have very limited superpowers so the riichi matches are more realistic, but still dramatic

A new origin story of Toki and Ryuuka who are fan favourites in the Achiga Arc. Watch Toki learn Riichi before she has developed her future-telling skills.

Kirinji is a 9 dan on Tenhou whose addiction to online mahjong led to his unemployment and divorce. He learns to make a living in mahjong parlours, but has to adapt his playing style for gambling in conditions of aka-ari and tonpuusens. This is interesting for Tenhou players who want to learn the style of aka-ari fast tonpuusen, which might involve more aggressive calls and faster hands. In this manga, the writer also shares some calling skills and reading open hands based on their calls. 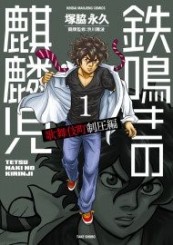 The sequel to the original series, Kirinji has reached 10 dan on Tenhou and is still gambling. He needs to conquer all the mahjong parlours to be scouted as a rep player as he needs a lot of money to look after his family. Kirinji has overcome his initial hurdles in mastering the aka-ari tonpuusen playstyle and is now learning to adapt to rules such as drawing ahead of your turn. Kirinji demonstrates some strong discard-reading skills which may be confusing but is very much worth learning.

This is a slightly dramatised autobiography of Aki (A current Professional Player) of the famous Nikaido sisters and how they became riichi Pros. Aki plays in Jansous to develop her mahjong skills. In the manga, there are also small WWYD puzzles to advise readers in choosing discards that make their hands flexible and high-scoring. 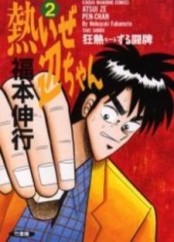 A brief comedy of someone who loves riichi with all his heart but is really bad at it.

A short story of a young student who became Japanese’s strongest riichi player by specialising in daisangen. Tenma is a hero who fights for what’s right and is able to defeat full Riichi pros by believing in himself.

The main character is a mahjong prodigy who thrashes everyone in the underworld by playing in an unpredictable way. Mukoubuchi is shown to be flexible based on the flow  of luck. He will win big when his luck is strong and catch the flow when his luck is poor. Mukoubuchi can also judge his opponents’ strengths and weaknesses and develop countermeasures to defeat them. 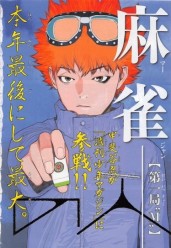 M reached the equivalent of Tenhou rank in this manga with the ability to read someone’s aura, as well as a superhuman memory that allow him to memorise all a player’s past games. He acquired this power after an accident which led to brain injury. Note: only a few chapters have been translated to English, so if you are interested, you might need to search for raws or Chinese subs. 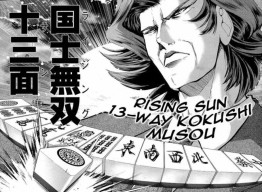 Better known as the Legend of Koizumi, this is a political satire which depicts world leaders solving international problems by playing mahjong. All world leaders have some form of mahjong powers which may be greatly exaggerated but highly amusing. The main character Junichiro Koizumi, former Prime Minister of Japan, is known for his ‘Rising Sun’ (Kokushi Musou) and Goumoupai (ability to scrape off the picture of any mahjong tile to make a haku). 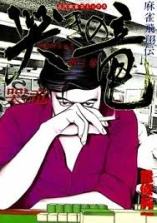 The main character Ryuu is known as the ‘Crying Dragon’, who makes chaotic calls but develops unpredictable big hands which lead him to be undefeated in the underworld.

Tetsuya picks up mahjong purely for gambling purposes, and initially performs well due to his natural talent and luck. However, he realises that he needs to cheat in order to survive in the gambling world. Tetsuya is a fast learner who eventually becomes one of the best gamblers in Shinjuku. 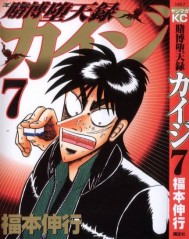 For the 3rd arc of Kaiji, he plays a unique style of riichi known as minefield mahjong. Both players use a whole wall to form a minimum mangan hand, and then later use the rest of the wall in a discarding war to win each other by ron. There is more emphasis on psychological play, cheating and gambling in this series and Kaiji triumphs in the end not by superior skill, but by his wit, cunning and proper planning. 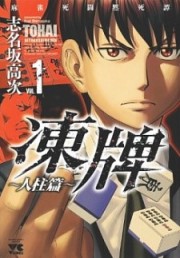 Kei is a high school student who plays high stakes mahjong in the underworld to seek thrill and provide for the girl that he is illegally hiding. Kei is young but formidable and is known for being calm and ‘ice-cold’ as he faces his opponents head-on. This series features a lot of ‘playing around your opponents’ waits’ in Riichi, which is good for intermediate players to learn. There may be some gore in this series, particularly in the live-action drama.